Melbourne Could Be The Cheapest City To Rent A House In Australia. This is the reason 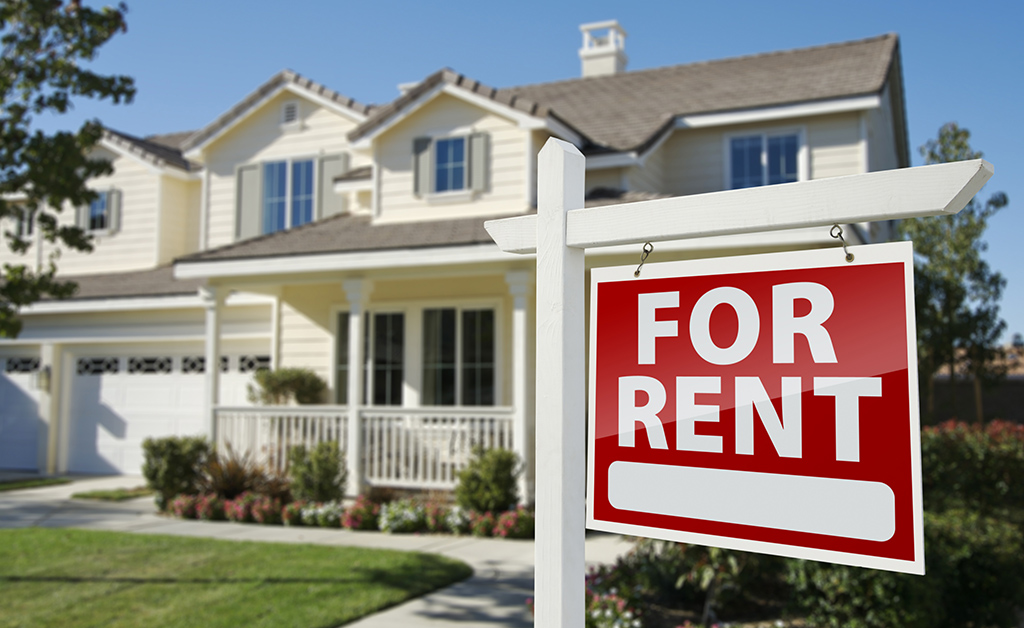 Rent prices are now at record highs in any state capital in Australia except Melbourne, Perth and Darwin.

But for the first time, Melbourne ranks second as the most affordable city to rent a house, on par with Perth, but still more expensive than Adelaide.

It is estimated that this year Melbourne could become the most affordable city if the current rental price trend continues.

This was revealed in a quarterly report from Domain, one of the managers of buying and selling and renting properties.

It was stated that there was a significant shift in preferences for renting a house over units in suburban areas outside the city and in certain cities compared to other cities. This is expected to continue throughout 2021.

Here’s the full Domains report for each city:

For the first time in five years, it is now more expensive to rent houses and units in Brisbane than in Melbourne.

Rents there have experienced the highest increase since 2008. Today, the average rental price is A$440 (Rp4.9 million) per week, up A$30 (Rp336 thousand) compared to last year.

“Tenants will find fewer options over the coming months. Exists have now shrunk by a third compared to last year,” said Dr Nicola Powell from Domain.

“House and unit rents remained stable or increased in all areas of Greater Brisbane during the March quarter, with the exception of Ipswich which was down $5 a week,” he explained.

“Each year, the largest spikes in rental demand were recorded for homes north of Brisbane and Moreton Bay North, up 6.8 per cent and 6.7 per cent per year,” added Dr Nicola. 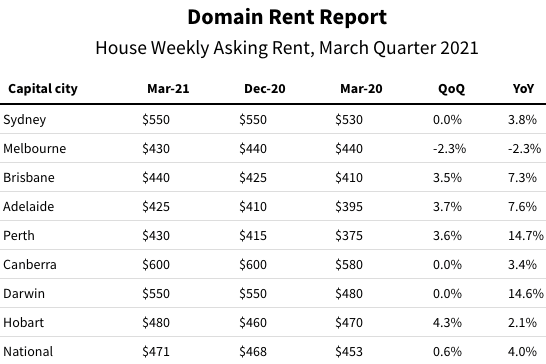 He said Queensland had always been a destination for people moving between states, but the pandemic may have accelerated people’s decision to move there.

“More Australians are moving to sunny states. The number of residents from other states moving to Queensland is at its highest level since 2006,” said Dr Nicola.

Canberra remains the most expensive capital city to rent a house or unit in the country, with prices averaging A$600 (Rp 6.7 million) and A$ 500 (Rp 5.6 million) per week.

Those who rent out their properties or commonly called ‘landlords’ are aware of this.

Melbourne is the cheapest for tenants

However, the rental market is not uniform. In the eastern, southeastern suburbs and Mornington Peninsula, rents are at record highs.

The current unit rental costs have returned to their 2015 price levels.

“For the first time Melbourne is the second most affordable capital city to rent a house together with Perth, but still behind Adelaide,” said Dr Nicola. 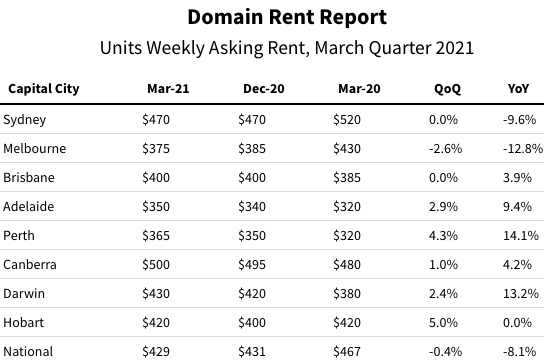 “Tighter rental market conditions in Adelaide and Perth could push prices higher than Melbourne in the coming months. This will make Melbourne the most affordable city to rent a place to live in,” said Dr Nicola.

Rental prices in Perth have continued to rise to their highest in nearly six years.

These prices are still lower than in 2013, but the gap is getting closer.

“In half a year, Perth went from being the most affordable capital city to being more expensive than Adelaide,” said Dr Nicola Powell.

“Renting a house in Perth is now on par with Melbourne,” he explained.

“More Australians are moving to Greater Perth. This will add to the demand for housing,” he said.

The rental market in Sydney is showing signs of stabilizing in the first quarter of 2021.

Unit rentals are holding up at an average of A$470 (Rp5.2 million) a week, after a nine-month decline last year of 9.6 percent.

“The rental market in Sydney remains variable depending on the type and location of the property,” said Dr Nicola.

“Conditions for renting houses are tighter compared to units and prices are becoming more competitive in the suburbs,” he explained.

Rents in Hobart jumped A$20 in the first quarter, pushing home rental prices to a record high and unit rents returning to last year’s levels.

“About five years ago Hobart was the most affordable city to rent, now it’s the fourth most expensive to rent houses and units,” said Dr Nicola.

“The estimated number of vacant places decreased by 38 percent compared to last year. When the rental moratorium ends, the ‘landlord’ will adjust the rental price,” he said.

Rents on the Sorell-Dodges Ferry rose 12.4 percent but rents in Hobart were lower than 12 months ago, down 2.7 percent for homes and 5.6 percent for units.

Adelaide is still the most affordable

Rents for houses and units in Adelaide actually experienced the highest increase.

“The increase in rental rates for houses and units in this quarter was the highest since 2009, up 3.7 percent and 7.6 percent, respectively,” said Dr Nicola.

However, despite rising rents, Adelaide remains the most affordable city for renters.

“It’s only A$5 (Rp56 thousand) difference in house rental prices in Adelaide and Melbourne. If rent increases continue, Adelaide will surpass Melbourne in the coming months,” he said. Prices in Darwin are the same as in Sydney

This means tenants are spending A$70 more in a week on housing and A$50 more for units.

“It costs the same to rent a house in Darwin and Sydney,” said Dr Nicola Powell.

“The rental market in Darwin may recover quickly, but rents remain below the 2013 record,” he explained.

“The sustainability of rental rates in Darwin is questionable given the short-term factors driving the recovery in rental demand,” he said.